I immediately remembered a meme that I have seen,
but the original was about female accounts on Facebook
and it was featuring Mark Zuckerberg… 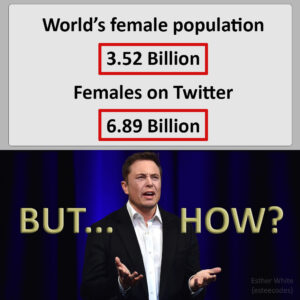 Around 300 ppl ever saw this image – my memes never go viral,
and maybe it’s because they don’t look patchy enough,
but if it’s a matter of compromising the quality of my creations
for the sake of going viral – I rather pass…

* the number of Twitter accounts that I wrote was a complete and total guess,
I did not go into researching the actual current count.